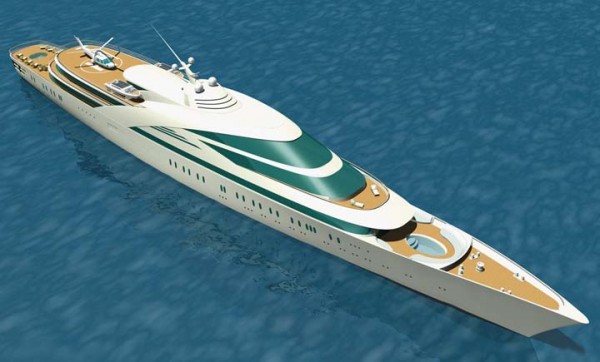 The yacht, whose design was adapted from a UAE Navy frigate, is rumored to have been commissioned by a member of an Arabic royal family. The vessel, formerly known as Swift 141, features luxurious accommodations for up to 60 guests along with 56 crew and is capable of an impressive 26 knots maximum speed thanks to her military pedigree. Yas’ cruising speed is 20 knots with a transoceanic range.

Paris-based Pierrejean Design was responsible for both the yacht’s interior and exterior styling, which features massive surfaces of glass. Her superstructure is the largest composite object of its kind ever built, and she features a carbon fibre door on her tender garage which doubles as a a boarding/swim platform. Of course there is also an outdoor pool/spa. “Our international team of experts, subcontractors, and suppliers has accomplished one of the great challenges in modern yacht building, and set in place a major milestone in shipbuilding technology and art that will be difficult to surpass,” Johan Valentijn, Privinvest Executive Board member and Industrial Manager in charge of the project, told Superyachttimes at Yas’ launch.