Qatar Airways has unveiled its new spacious and high-tech Business Class seats for its highly anticipated Boeing 787 aircraft that will be added to the fleet this summer. The Mayor of Berlin Klaus Wowereit, together with other VIPs, joined Qatar Airways chief executive Akbar Al Baker for the official unveiling of the seats on the opening day of ITB Berlin. 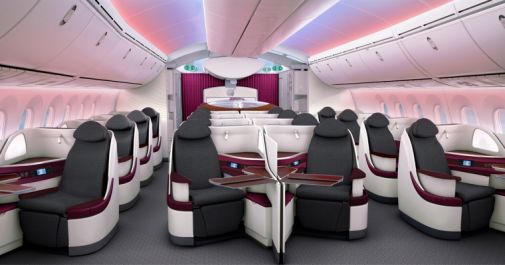 The seats are a central feature of Qatar Airways’ new-look exhibition stand, which is making its debut at the five-day event. Qatar Airways’ new 787s will feature a total of 254 seats in a two-class configuration of 22 in Business Class and 232 in Economy. Touch screen Android technology control units with a dual screen interface will debut on Qatar Airways’ 787s. Passengers will be able to select from 1,000 movie, TV programmes, music and gaming entertainment options. Passengers can be fully connected through WIFI and GSM telephony, sending both text and MMS messages. Voice calls, although possible, will be disabled to minimise passenger disruption. With a 1–2–1 configuration in Business Class, the layout features two less seats than conventional wide body aircraft, which Qatar claims is more typical of a First Class cabin in terms of space. Passengers can sit back and relax in a 22-inch wide armchair that converts at a touch of a button into different cradle positions before reaching an extremely generous 80-inch long, 30-inch wide flat bed offering exceptional legroom. Adjustable armrests can complement different body positions while dining, reading, working or resting. There is ample storage space such as a show drawer and side compartment for personal belongings. The seats, produced by B/E Aerospace, also feature generous 17-inch personal touch screen TV monitors and a wood trimmed sliding table Qatar Airways is the first Middle East customer of the Boeing 787, with 60 aircraft on order, including options. The Doha-based airline is preparing to take delivery of five 787s during 2012, with the first set to arrive in Qatar this summer. The carrier will initially operate the aircraft on intra-Gulf routes to provide flight crew with training hours before Qatar Airways’ 787 is scheduled to appear on static display at the Farnborough Air Show in July and then enter its first long-haul commercial service on the Doha – London Heathrow route. As part of its 2012 expansion programme, the airline recently launched flights to the European capital cities of Tbilisi in Georgia and Baku in Azerbaijan and is planning to introduce Helsinki and Zagreb routes by the end of the year.