A campaign is afoot to build a new megayacht for the Queen of England and the British Royal Family which, when completed, will be the world’s 3rd largest yacht behind those of Roman Abramovich and the ruler of Dubai. 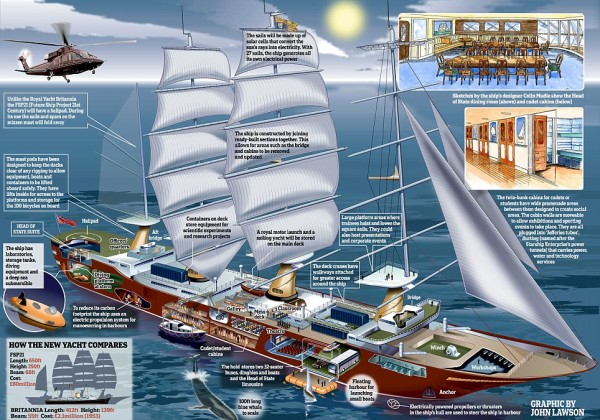 The beleaguered British taxpayer won’t be asked to foot the bill for the 515-ft. ultra-luxury vessel, however; the London Daily Mail reports that the approximate $125 million cost of the project will come from private and corporate sources who would like to see the Windsors travel the high seas in style and deliver the craft in time for the Queen’s Diamond Jubilee in June 2012. Their previous vessel, the 412 ft. Royal Brittania built in 1953, was retired in 1997.

Codenamed FSP21 (Future Ship Project 21st Century), the new yacht is designed as a a four masted square-rigged barque with solar capability and an auxiliary diesel electric power plant good for a speed of around 20 knots and a range of 6000 nautical miles. The yacht would be fitted to carry a helicopter, a miniature submarine, sailboat, two buses, bicycles and an underwater laboratory for use by the Royal Navy to offset operating costs, and could also be used as a sort of an ocean-going embassy with an important commercial, educational and scientific role. It may all be a newspaper editor’s pipe dream, of course, but you never know.