Design
June 1, 2011 by Luxlife
0 0 0
1 June 2011
The annual cadence of design collections is transformed into a story divided by chapters. So, while in 2010 we saw the hordes of Attila, recounted by Barbarians, this year we find ourselves in a magical place, suspended in time, such that this new episode can only be entitled Edra in Wonderland. 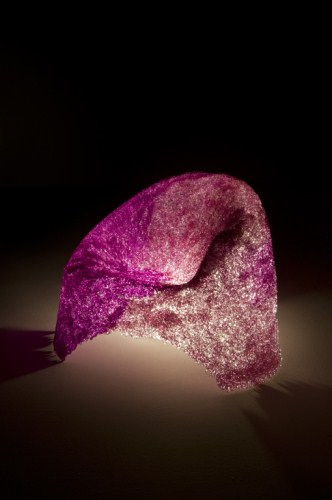 This collection privileges natural materials, worked apparently to a minimum so as to conserve their flavor. They embody a concept of comfort whereby a sofa, for example, displays that slightly unkempt look that belongs to objects of affection – that is, to the things we really use and love.
In this landscape of heavy fabrics, great slabs of solid mahogany and whole, ultra-soft animal hides, there appears an exception, colorful and luminous, called Alice (as in Alice in Wonderland). 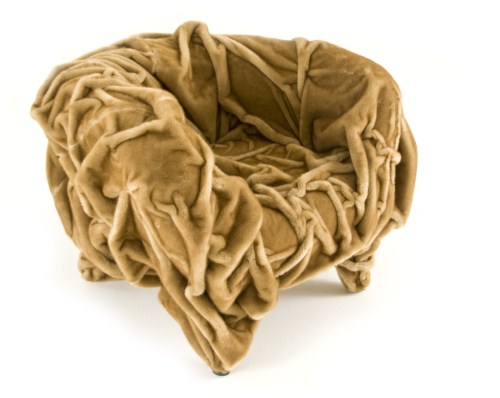 “Grinza” armchair, design Fernando and Humberto Campana
The Campana brothers, in their years with Edra, have always considered the material with which each piece is realized as a value unto itself. From the wooden slats of the Favela chair, to the long strands of raffia of the Cabana container, to the curved stainless steel of the Corallo chair or the 120 meters of velvet tubing of the Boa sofa. And now there’s Grinza, which has a steel tube frame and polyurethane padding, with great expanses of leather or eco-fur draped softly over the structure.
Francesco Binfaré, in designing his new sofa, observed the real life of painters in their studios, where the course of existence had left marks and folds on a threadbare sofa. Binfaré recognized there a concept of comfort as intriguing as it is distant from the code of orderly perfection. The result is Sfatto, whose name means ‘disheveled’,  with its ultra-soft padding and adjustable backrest, covered in heavy fabrics.
As always in the Edra philosophy, achieving this ‘informal’ image was preceded by complex research, consisting on the one hand of sophisticated engineering, and a long process of manual finishing on the other. With one simple movement, Sfatto allows the user to easily switch from a classic low divan to a high, inviting sofa. 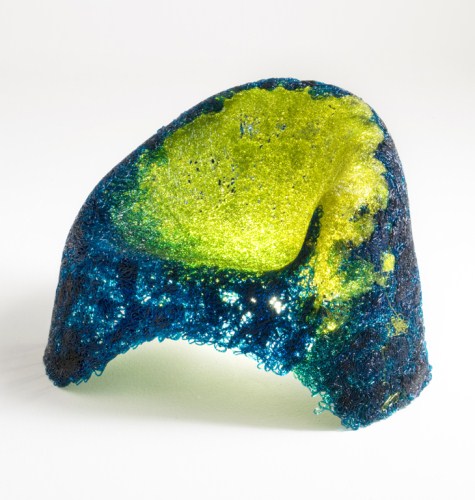 Jacopo Foggini stunned the design world by proposing luminous creatures, with organic forms and brilliant colors made of translucent plastic cord. Today, Foggini revives this style, re-proposing the plastic cord in a form that seems to tangle and unwind to create a tremulously armchair, which in reality is absolutely solid; apparently made by hand and left unfinished; characterized by colors like lemon yellow, petroleum green and fuchsia pink, all mixed together.
Below, a light source, so that Alice is lit from within. 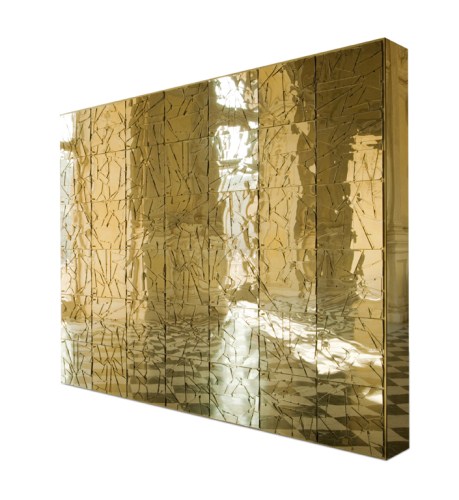 Edra was founded in 1987. Characterized from the outset by a highly innovative approach to design and manufacturing, its roots were nonetheless solidly planted in an established tradition of furniture making that the Mazzei family had maintained since 1949. The revolution introduced by Monica and Valerio Mazzei, offspring of the founding generation, and by Massimo Morozzi, art director from the start, began from a specialized knowledge of production methods and developed in one of the richest historical, artistic and craftsmanly contexts in the world, Tuscany.
The name Edra derives from a compression of the Greek word exedra, which refers to an architectural space reserved for philosophical conversation, confirming that right from the beginning, Edra was focused on the relationship between the furniture it produces and the architecture that hosts it. A relationship of respect, but also of the reciprocal ability to surprise by refusing to accept stereotypes and clichés. As such, since 1987 Edra has sought to propose innovative objects at the cutting edge of contemporary design, both formally and technologically.
Objects-icons that embody the Edra spirit and therefore difficult to imitate, far from the contrived quest for superficial details, capable of becoming ‘contemporary classics’, conserving their power over time and, precisely for this reason, achieving timelessness.
This is why Edra’s pieces are found not only in the most interesting interiors of the past quarter century, but in the permanent collections of the world’s foremost design museums, including the Centre Georges Pompidou (Paris), MoMA (New York), the Triennale Design Museum (Milan) and Vitra Design Museum (Weil am Rhein), not to mention major museums in Chicago, Lisbon, Montreal, Tokyo, Lausanne, Munich, Philadelphia, Hamburg, Tel Aviv, Vienna, Helsinki, even the remote Icelandic Museum of Design and Applied Arts in Reykjavik. 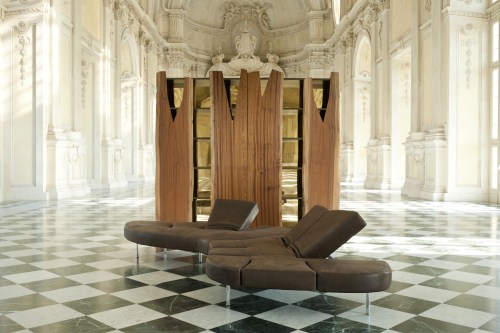 The essence of the Edra spirit derives from what can be called a policy of encounters, foremost among which was the epochal encounter with Massimo Morozzi, architect, designer and exponent in the late ‘60s of the radical Florentine groups. Morozzi proposed to Edra an approach that was absolutely atypical in Italy, consisting of advanced research, both technical and formal, whereby every project, indeed every detail would simultaneously involve the most innovative technologies and the most refined manual skills, in keeping with the motto ‘High Tech – Hand Made’.
This lateral vision, as free as it is original, made possible the other encounters that have come to define Edra. First, with Francesco Binfaré, an Italian ‘outsider’ who found in Edra the opportunity to demonstrate his unrivalled talent in designing upholstered furniture. Indeed, his famous sofas have revolutionized this heretofore static category, introducing a new concept of comfort.
Another fundamental encounter is that with Fernando and Humberto Campana, which, despite the enormous geographic and cultural distances, can be defined as ‘affinity’. The Campana brothers, by now legendary all over the world, have found hospitality and comprehension at Edra since 1998. Their language of extremes, of imagination in its pure state, of the intersection of craftsmanship and industry has since become so inextricably tied to the philosophy and know-how of Edra as to have become an indispensable key to interpreting the company’s activities.
Along with these encounters which today constitute the backbone of Edra’s production, there are others, defined as always by ‘elective affinities’, from the ironic Fiori by Masanori Umeda (1990) to the iconic homage to Tatlin’s Monument to the Third International by Cananzi and Semprini; from Zaha Hadid’s first industrial project in 1988 to the interventions by Peter Traag (2005) that straddle the boundary between art and design. In fact, it was in an art gallery, the renowned Studio Marconi in Milan, that the Edra adventure began in 1987, with a show I Nuovissimi, a series of prototypes by students from Domus Academy.
This amalgam of different realities found vigorous expression in the installations at the Milan Salone del Mobile and in the photographs of Emilio Tremolada, but above all in the innumerable instances of real life, from homes to hotels, from offices to cruise ships. The compatibility of Edra’s production with real life situations is ably witnessed by the volume Interiors: Abitare con Edra. Thanks to this compatibility, it becomes clear how an approach of timeless quality characterized by a dialogue with the most advanced components in the world of art, gives rise to concrete objects built with the most sophisticated technologies and finished with artisanal processes, which together define the quality for which ‘Made in Italy’ is known all over the world.
Edra’s pieces are thus destined to last over time, precisely because they are free from the flow of changing styles that characterize the design scene.
In the final analysis, one could define the Edra language as completely unprecedented, capable of combining global needs with refined identitary processes; of inhabiting the world with the confidence and uniqueness that has always characterized the greatest works of art. 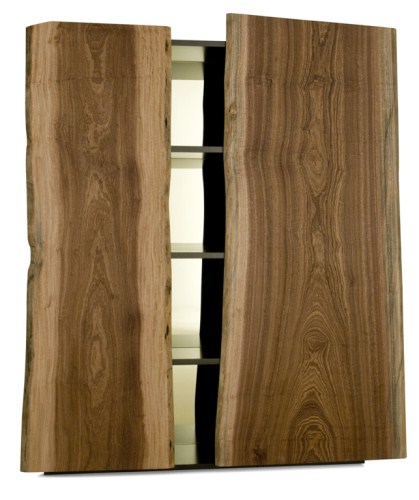 The Edra collection, along with a few other top European luxury furniture brands are available exclusively through Limeline in Southern Africa. For more information, please contact Limeline on +27214248682, visit their website on www.limeline.co.za, or visit their showroom at the 15 on Orange Hotel, Cape Town.