31 August 2010
Bono and and his wife Ali Hewson star in the newest of Louis Vuitton’s “core values” ads shot by Annie Leibovitz.

The couple, who were shot in South Africa, wear clothing by Edun, Hewson’s sustainable fashion line. in which LVMH took a 49 percent stake last year.

it’s the first time the U2 front man has appeared in an ad without his band, and the first time a label other than Vuitton is getting a fashion credit. 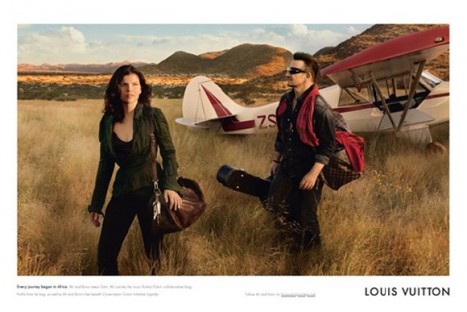 Antoine Arnault, Vuitton’s director of communications, explained that Edun’s presence in a LV campaign would give the small brand major international exposure.

Ali Hewson carries a new handbag that was a join project between Edun and LV and has a special charm that is the French firm’s first made-in-Africa product.

The ad – which reads “Every Journey Begins in Africa” – features the humanitarian duo arriving in an African grassland.

Both Bono and Hewson donated their appearance fee to charity organizations that promote growth in developing countries.

A portion of the profits from their new co-designed LV bag will also go to charities.