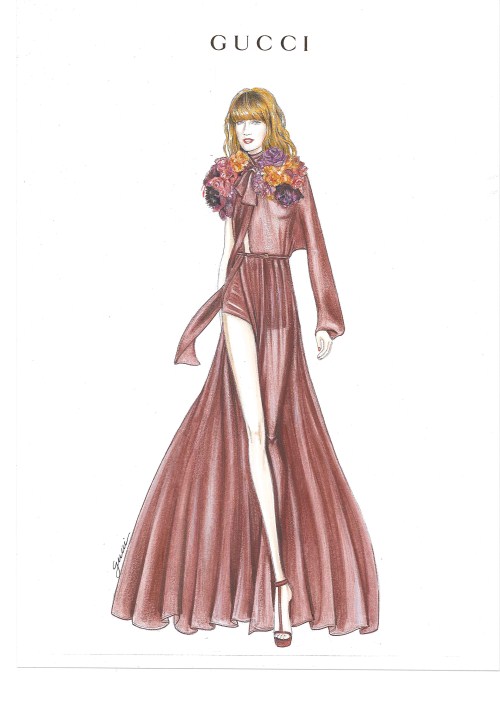 Giannini said, “When Florence first came onto the scene, I was captivated by her eccentric style and her willingness to dare. I felt there was such an authentic energy to her sound and her look. This was confirmed when I met her at the Grammys earlier this year. I used one of Florence’s songs, ‘Hurricane Drunk,’ to set the mood for my Autumn Winter women’s show, as she was truly an inspiration for this collection as a modern day icon with her cinematic allure and powerful presence.”

Welch added, “I was extremely flattered when I heard that Frida’s collection had been inspired in part by my performances and I was completely bowled over by her collection, the dresses seemed perfect for my shows, the colours, the shapes, the movement in the fabric. So it seemed natural that we work together on creating some pieces for my upcoming US tour. I’m very grateful to Frida, it’s been a wonderful experience and I can’t wait to get dressed for the stage!”

Florence and the Machine’s debut album Lungs was released in July 2009 by Island Records and reached the number one position on the UK Albums Chart. Subsequently the record was certified quadruple platinum in the UK and Ireland, platinum in Australia, and gold in the US, Canada, and New Zealand. The songs, full of Gothic imagery and fairytale flights of fantasy, make for an honest, heartfelt album about love and pain.

Florence and the Machine tour dates:

July 2 Nashville – Vanderbilt Stadium with U2