7 September 2010
Seaside luxury is an attractive proposition anywhere but in the arid heat of Arabia where it has long been an underdeveloped lifestyle market, it could mean exceptionally big business. 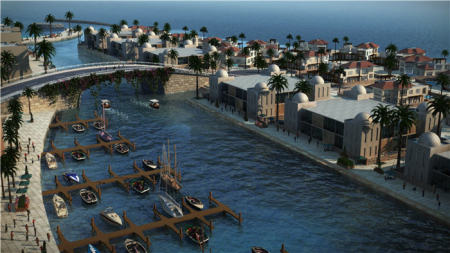 An artist’s rendering of one view of the Marsa Zayed development in Aqaba, Jordan

According to one local online recruitment publication, the Gulf Jobs Market, Dubai’s luxury retailers are now in agreement that the emirate did in fact traverse a “crossroads” of recovery some time after the end of the first quarter. But while the economies of the United Arab Emirates may well be back on track (as forecasted) thanks to some neighbourly assistance provided by Abu Dhabi to Dubai back around the the new year, other cities in the region are happily basking in some of Dubai’s limelight as the luxury industry continues to eye the city-state with some caution.

It’s not only Doha, Manama and Kuwait City they’re talking about – competition is sprouting up all over the Middle East. True, Dubai still has no serious single rival but many new urban development projects could collectively and incrementally weaken its grip on the luxury monopoly. They may be smaller luxury destinations but they do share Dubai’s enviable combination of sand, sea and sunshine.

For one, the city of Aqaba, Jordan’s only resort with sandy beaches on the Red Sea, is getting a major facelift, reports the FT. The two biggest projects there will offer substantial opportunities to companies in the luxury industry: the Marsa Zayed complex (developed by the UAE’s Maabar) will include a marina, luxury hotels, retail and residences while the Saraya Aqaba (owned by Lebanon’s Hariri family) aims to attract designer fashion boutiques and upmarket hospitality and recreational tenants to service its luxury villas and apartments.

Just across Jordan’s border – which Aqaba straddles – Saudi Arabia is also aggressively developing its seafront real estate into a high end haven for yachting, retail and leisure outlets. Zawya recently reported that 3 of the 12 major maritime projects to be constructed over the next three years in GCC countries are to be in Saudi Arabia. The kingdom is planning these three brand new urban mega-projects on the Red Sea, further expanding its luxury market in the process. Rising up from the sand are King Abdullah Economic City, Jazan Economic City and the Kingdom City, not far from Jeddah (in which the world’s tallest building – the so-called Half-Mile Tower – has been proposed by Kingdom Holding Company’s chairman Prince Al-Waleed bin Talal). 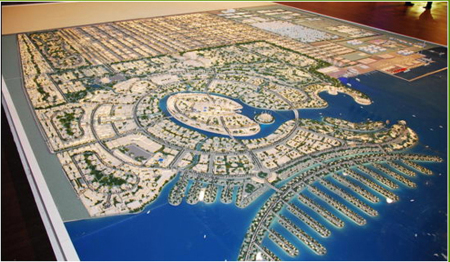 A model of how Jazan Economic City will look, upon completion

A jaunt along the coastline is Jeddah, which serves as a transit point for hajj and umrah pilgrims on their way inland to the holy city of Mecca. Presumably, the new Saudi residential cities will also be a magnate for wealthy pilgrims who wish to add some seaside rest and relaxation to the end of their journey which began in bustling Jeddah. Mecca itself has been in the news ever since it was first reported that Raffles would open a hotel there. Not only has it now finally opened but according to Luxuo, several other luxury hoteliers (including the Fairmont and Swissotel), are following Raffles there – either in one of the adjacent towers in the same Abraj Al-Bait Complex or elsewhere.

Also in the news are two veteran seaside resort towns of the region which have the potential to become greater hubs for the luxury industry. Despite their association with terrorist bombings and civil war, they show no signs of slowing down. Hop half-way across the Red Sea from the northern coast of Saudi Arabia and you touch down in Sharm El-Sheikh, where the opening of Sol Melia Group’s 5-star Melia Sharm on the tip of the Egyptian Sinai Peninsula has just been announced. Beirut, meanwhile, is positively booming, says The National. It has recently welcomed ultra-luxe brands like Christian Dior, Hermes and Louis Vuitton (and soon Chanel) into the already substantial luxury retail market there and is said to be the next target for hotels such as the Hilton, Le Royal and the Landmark and gourmet eateries which include MoMo, Joel Robuchon and Yannick Alleno.