29 September 2010
A new luxury train began running Thursday between Moscow and Nice in the south of France, in a flashback to the tsarist times when Russian aristocrats flocked to the French Riviera. 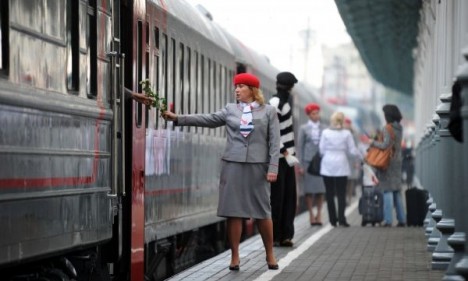 The Russian Railways-operated train will depart from Moscow’s Belorussky station every Thursday afternoon, and arrive in Nice 53 hours later after passing through European capitals including Warsaw and Vienna.

“Today is a day of celebration,” said Mikhail Akulov, vice president of Russian Railways, “It’s a new stage in our partnership with the French railways.”

The Russian rail monopoly said it had sold 90 percent of the tickets for the train’s maiden journey.

The fare ranges from 306 euros to 1,200 euros for a luxury compartment with a shower and mini-bar.

An orchestra played Russian and French songs while several mime artists handed out balloons to passengers and bystanders before the train departed.

Nice became an established resort for Russian high society after the Romanov family built a vacation home there in 1856.

It has one of the largest Russian Orthodox cathedrals outside of Russia as well as a Russian cemetery.